Dividend Blog
You are here: Home / Dividend Blog / Investing / How to Pick Dividend Stocks with a Time Machine

If you’re like me, you spend a fair amount of time thinking about the stocks that got away. Those times in the market when you wish you had the foresight to buy into a sector or even into a specific stock. The times when all the economic data and analysis was right there in front of you but you just didn’t put it together.

In short, you wish you had a time machine.

Ok, so it does not good to sit around and regret past decisions. The best you can do is learn from them and be a better investor for it. Don’t beat yourself up over the past. That’s what I would normally say but it turns out you may now have the opportunity to do a little time travel investing!

Charge the Flux Capacitor and Set the Way-Back Machine

Remember back in September 2012, when the Federal Open Market Committee (FOMC) announced its third round of quantitative easing? The economy had been rebounding for a few years but at a very slow pace and wage growth was still nonexistent.

The Fed had provided two earlier programs, ending in 2010 and 2011, that had helped but more still needed to be done. We won’t go into the details of how the Fed buys bonds with money that is then pumped into the economy. The demand for bonds pushes rates down and credit becomes cheaper, hopefully jumpstarting the economy.

There are some that question whether central bank monetary programs actually help promote economic growth. What is less questionable is that they drive asset prices higher. During the two years that the Fed was buying upwards of $85 billion in bonds each month, the S&P 500 climbed nearly 37% and you could argue that gains before the program were attributable on anticipation.

Fast-forward to where we are today. The European Central Bank announced in January its own program of bond-buying that subsequently started in March. The ECB will buy a little over $60 billion a month in government and asset-backed bonds through September of 2016, injecting more than a trillion dollars into the economy.

Like the U.S. in 2012, the ECB had tried other bond-buying and fiscal programs. The programs in Europe have been much more targeted to reducing deficits and less about monetary easing, and the economy is in much worse shape than where the U.S. was in 2012 but it is a close analogy.

While the STOXX Europe 600 index is well off its 2009 low, it is just recently passed its pre-recession high and has lagged the S&P 500 by more than 40% since the start of QE3 in 2012. On a price of about 18 times earnings of corporations in the index, the index sells at a 12% discount to the U.S. index. 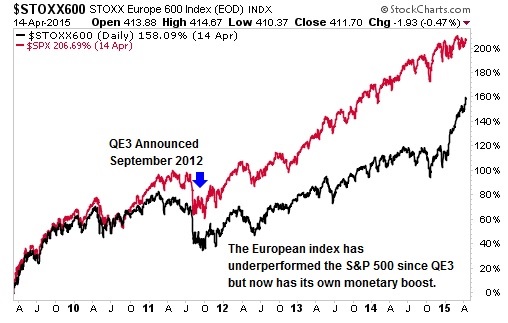 Besides a monetary boost, European companies are likely to benefit from the weaker euro over the next year. You don’t normally see depreciation of 20% in a major currency over the course of a year but that is exactly what has happened to the euro against the dollar. Exports are significantly cheaper and recent economic data is looking stronger.

While there are certainly good individual stocks out there, I like a few exchange traded funds for the broader theme. The Vanguard FTSE Europe (NYSE: VGK) holds shares of 529 companies in the region with a median market cap of $48.8 billion. The fund sells for just 17 times earnings and the 0.12% expense ratio is one of the lowest available. European stocks typically pay higher dividends than their American counterparts and the Vanguard fund delivers with a 3.4% annual yield. Companies from the United Kingdom accounts for 32% of the portfolio but the rest is fairly well-diversified across the region.

I also like the iShares MSCI Europe Financials (Nasdaq: EUFN) and its exposure to 105 financial institutions from the region. Financials in the U.K. again make up nearly a third of the portfolio but it still provides a diversified exposure across 13 countries. Shares pay a 3.2% dividend yield and are priced at 15.7 times trailing earnings, a 6% discount to the companies in the Financial Select Sector SPDR (NYSE: XLF) of U.S. financials. I like European financials because banks provide a larger share of capital to businesses in Europe compared to the United States where the markets provide more capital. As the economy improves, banks will benefit on loan growth.

The ECB monetary program may not have the exact affect on stocks as the prior program had in the United States. Some members of the European Union are much more hesitant to employ monetary measures and may pull back on the program if the economy starts looking much better. Still, the scenario should lead to higher asset prices as it did for U.S. markets over the last couple of years. That combined with healthy dividend payments should make for returns likely in the double-digits.

For me, I’ll take double-digits and you can keep the time machine.

After a Strong Increase, Cisco Shares May Still be A Buy Dividend Stocks With Income And Revenue Growth
Scroll to top